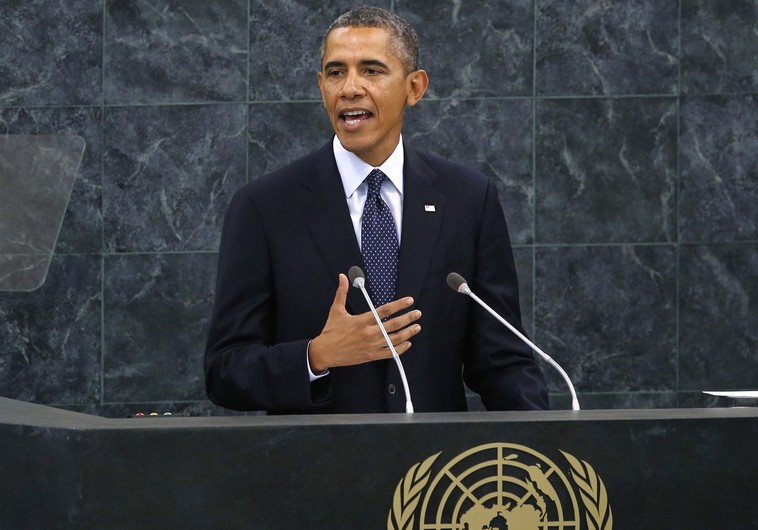 Palestinian plight ‘worthy of reflection’ in Israel, Obama tells UN General Assembly
J.Post 24/09/14
Violence engulfing the Middle East has made “too many Israelis ready to abandon the hard work of peace,” US President Barack Obama said.
Ban Ki-moon
NEW YORK – Violence engulfing the Middle East has made “too many Israelis ready to abandon the hard work of peace,” US President Barack Obama said today at the United Nations, in a speech sparing no power in the region from his criticism of their state of affairs.
Recommitting his administration to the peace process between Israel and the Palestinians, Obama said that murderous extremism roiling the region should put to rest the “illusion” that conflict between Arabs and Israelis stands at root of all problems in the Middle East.
“The situation in Iraq, Syria and Libya should cure anyone of the illusion that this conflict is the main source of problems in the region,” he said. “For far too long, it has been used in part as a way to distract people from problems at home.”
But the plight of the Palestinian people is “worthy of reflection” in Israel, the president continued, describing the status quo in the West Bank and Gaza as “not sustainable.”
The president’s line on Israel’s need for “reflection” appeared to be a late addition to the speech, as it was not featured in a version obtained before its delivery.
“As bleak as the landscape appears, America will not give up on the pursuit of peace,” he said. “We cannot afford to turn away from this effort– not when rockets are fired at innocent Israelis, or the lives of so many Palestinian children are taken from us in Gaza.”
Obama also spoke of negotiations with Iran over its nuclear program, directly addressing its leaders with a call to seize the “historic opportunity” for a comprehensive deal.
“Do not let this opportunity pass,” he said. “We can reach a solution that meets your energy needs while ensuring the world that your program is peaceful.”
The speech was a broad condemnation of extremism, particularly in the Middle East and North Africa, where the Obama administration has committed to a war against Islamic State, al-Qaida and their affiliates “wherever they are” in recent weeks.
“No God condones this terror. No grievance justifies these actions. There can be no reasoning,” Obama said.
The president will host Prime Minister Binyamin Netanyahu at the White House on October 1, after the Israeli premier addresses the UN over the weekend.