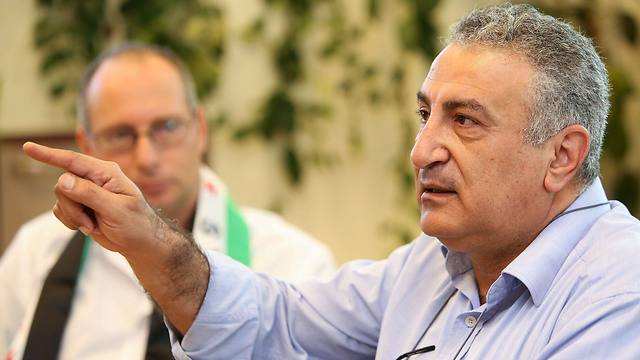 Dr. Kamal Al-Labwani criticizes Obama for his inaction on Syria, calls for a no-fly zone over northern and southern Syria and more humanitarian aid.
Dr. Kamal Al-Labwani is on a mission – to help overthrow the Syrian regime which he says is responsible for the death of 400,000 Syrians and the displacement, both inside and outside the country, of ten million. To achieve that mission he will do almost anything, including a visit to Israel, a long-time enemy of Syria. “I thank the Israeli people and the Jewish community in the US for all of the humanitarian aid they have given the Syrian people,” Al-Lubwani told journalists. “I have visited the Holocaust museum here and this is a crime until today.”
He compared the killing in Syria since the civil war began in 2011 to the Holocaust during World War II, which killed six million Jews.
“You understand more than any people in the world what a massacre is,” Al-Labwani told journalists, including some Israelis, at the Jerusalem Press Club. “Bashar Assad commits serious crimes like in the Holocaust.”
Al-Labwani called for an internationally enforced no-fly zone in both northern and southern Syria and humanitarian aid entering Syria via the Golan Heights, which Israel captured from Syria in the 1967 Six-Day War. That area has recently seen heavy fighting between Syrian rebels and troops loyal to Assad, and this week the United Nations moved all of its troops from the area into Israel. He called on Israel and other states to send more humanitarian aid across the border between Syria and Israel.
The Syrian activist, who is also a medical doctor, is on a ten-day visit to Israel. He would not say who sponsored his trip or who he is meeting with while in the country, except to say that it includes Israelis from across the political spectrum.
He said he came to Israel across the Allenby Bridge from Jordan, with an Israeli-government issued visa.
Al-Labwani was a doctor in the army during the 1982 massacre at Hama, when Syrian troops killed between 10,000 and 40,000 Syrian citizens to quell an uprising from the Muslim Brotherhood. He spent most of the years from 2001–2011 in a Syrian prison for his human rights activism and for forming the Syrian Liberal Democratic Union in 2001, one of the first opposition groups in Syria.
Since then, Al-Labwani has worked in Turkey as a member of the Syrian National Council, which tried to unite the opposition factions. Then, after the Syrian National Council’s dissolution, as a member of the General Secretariat and Committee of the National Coalition for Syrian Revolutionary and Oppositionist Forces. In early 2014, he withdrew from the National Coalition and has been working independently ever since. Dr Labwani also became known for his public call for Israel to take a clearer stand and intervene on the side of the moderate Syrian Opposition.
He criticized US President Obama’s focus on Islamic State (IS) at the expense of confronting Syrian President Bashar Assad.
“Four thousand people have been killed by IS and 400,000 by the regime – who is the bigger terrorist?” he asked. “For me IS is only a small problem, but the Syrian government is a much bigger problem.”
Al-Labwani said that IS currently controls 40 percent of the land in Syria, although it has few followers among the Syrian people, while the regime controls another 40 percent. He said many of those who have joined the ranks of IS did so for economic reasons. If the economy in Syria improved, he said, many of them would leave IS.
Israel has been reticent to get involved in the fighting in Syria. While it has treated at least 800 Syrian patients in Israeli hospitals and sent some humanitarian aid, it has said the fighting in Syria is an internal matter. Privately, Israeli officials have said that they prefer the Assad regime to stay in place, as the border between Israel and Syria has been relatively quiet.
Article written by Linda Gradstein.
Reprinted with permission from The Media Line.