How to Heal a Politically “Reprobate Mind”?
Elie Aoun/November 04/15

One aspect of salvation is to be saved from the habit and dominion of sin, whose traits are exhibited within the Lebanese political realm as:
Being full of all unrighteousness, wickedness, covetousness, maliciousness, full of envy, of murder, of debate, of deceit, taking all things in the evil part, whisperers, backbiters, haters of God, doers of wrong, proud, boasters, inventors of evil things, without understanding, covenant breakers, without natural affection, such as can never be appeased, merciless. The root cause of these things, according to the Bible, is a “reprobate mind” (Romans 1:28-32) which is given to those who:
(1) “changed the glory of the incorruptible God into an image made like to corruptible man,”
(2) “changed the truth of God into a lie,”
(3) “worshipped and served the creature more than the Creator,” and
(4) “did not like to retain God in their knowledge.” (Romans 1:23, 25, 28)
Where did the Lebanese change the truth of God into a lie, etc? By false worship.

Firstly, God commands us: Thou shall not bow down to graven images, neither any similitude of things that are in heaven above, neither that are in the earth beneath. (Exodus 20:4-5). The Lebanese cannot establish a viable nation when about half of them (Christian) bows down to statues and corrupted images, while the other half (Muslim) bows down east towards a black cube. Those who bow to them become like them — They have a mouth, and speak not: they have eyes, and see not. They have ears, and hear not: they have noses and smell not. (Psalm 115:5-8)

By not properly honoring God, the Lebanese dishonored themselves. They shamelessly changed the truth of God into idol falsehood, and lost sight of the Creator in that which was created (while falsely proclaiming to worship the Creator by means of the created statues, images, and a black cube). Not to worship at all is better (for the mind) than false worship.

Secondly, many Lebanese have forgotten the true God and chased after other “gods”: their political leaders — to whom they sacrifice their time, their energy, their talent, their money, their service, and even their lives. They became their politicians’ slaves working on their politicians’ projects. Those who do so, God gave them up to an undiscerning mind. Instead, they should have been working on God’s project in their own lives.

CONCLUSION
The contempt of religion is the fountain of all mischief. If a man will not worship God as God, he is so left to himself that he throws away his very manhood.
Let us transcend false traditional worship and political practices. Let us directly pursue the Word of God by reading the Bible so that we and our nation may be blessed to overcome the deceptions enslaving us.
Even Muslim nationals are called to do the same. The Quran states: “And let the people of the Gospel judge by what Allah has revealed therein. And whoever does not judge by what Allah has revealed, then it is those who are defiantly disobedient.” (Surat Al-Ma’idah 5:47)
We must act according to what God has revealed in the Gospel — where God clearly commands us not to bow to hand-made things.
Those who kneel east towards a black cube, and those who kneel to religious statues, are “defiantly disobedient,” Through their practices, they bring the wrath of God against our people and our nation.
The black-robed clergy are leading the people astray to their own destruction. Any clergymen who pursues false worship — and any political leader with pagan idols: logos, flags, or hand-signs — are not acting according to the Word of God and are not fit to be followed.
The Lebanese must, each on his or her own, (1) read at least one paragraph
from the Bible every day; (2) stop bowing to statues or the black cube; (3) abandon political parties with pagan logos and hand-signs; and (4) act with love — by teaching, guiding, and assisting where possible.
This “campaign” does not require of anyone to do anything except committing to these four objectives in their own personal life. They could do so without even explaining to anyone about what they are doing. It would be their journey with God. In time, their “silent action” will bring healing to their lives, their families, their community, and their nation.
“This is that victory that has overcome this world: our faith.” (1 John 5:4) 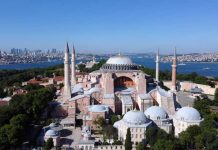 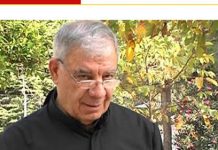 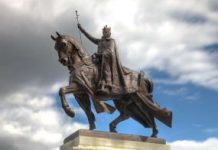 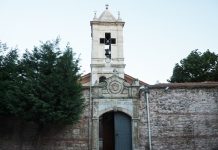