Updated Dec. 20, 2008 12:01 a.m. ET
Bill Clinton’s ties to Nigerian businessman Gilbert Chagoury illustrate the kind of complicated relationships with foreign figures the former president is now disclosing to pave the way for Hillary Clinton to become secretary of state.
Nigerian businessman Gilbert Chagoury, shown with his wife, Rose-Marie, has long been a financial supporter of Mr. Clinton. Getty Images
Mr. Chagoury is one of the biggest donors to the Clinton Foundation, having given between $1 million and $5 million, according to the list of over 200,000 contributors released Thursday by the former president’s charitable organization. The release of the names came as part of an effort by Mr. Clinton to satisfy the incoming Obama administration that his extensive array of foreign donors wouldn’t present problems for Mrs. Clinton as the nation’s top diplomat.
Mr. Chagoury has long been a financial supporter of Mr. Clinton. He donated funds to support then-President Clinton’s 1996 re-election effort, and later helped the former president land a lucrative speaking fee. Members of the Chagoury family donated thousands of dollars to Mrs. Clinton’s recent unsuccessful run for the Democratic presidential nomination.
Mr. Chagoury is also a figure with a controversial past. In the mid-1990s, he was known for a close association with Nigeria’s military dictator, Sani Abacha, which helped him land lucrative business contracts in construction and other areas.
After Gen. Abacha died in 1998, Swiss and other European authorities froze a number of bank accounts, including some related to Mr. Chagoury, as part of an investigation by the Nigerian government and others about whether billions of dollars had been improperly taken out of the country during the Abacha regime, according to news reports and a 2001 British court decision in Abacha-related litigation. Mr. Chagoury later agreed to return funds, estimated to be as much as $300 million, to the Nigerian government in exchange for indemnity from possible charges and to unfreeze his accounts, according to the British court decision.
Mr. Chagoury and his family still have large business interests in Nigeria. That country’s big oil supplies and large population make it one of the most important nations in Africa to the U.S. “He has lots of contacts in Nigeria and knows lots of people who are still in power,” said Patrick Smith, editor of Africa Confidential, a leading newsletter covering African affairs. Given Mr. Chagoury’s record in Nigeria in connection with the Abacha dictatorship, his relationship with Mr. Clinton “must be a problem” for Mrs. Clinton as secretary of state, said Mr. Smith.
The Nigerian embassy in Washington didn’t respond to inquiries about Mr. Chagoury.
The Nigerian-born Mr. Chagoury, whose family is Lebanese, has also been a financial supporter of Christian politicians and religious leaders in Lebanon, another potential diplomatic hot spot, say people familiar with that nation’s political scene.
Mr. Chagoury and representatives for Mr. Clinton have repeatedly declined to comment on the two men’s relationship. Following Thursday’s disclosures by the Clinton Foundation, a spokesman for President-elect Barack Obama said Mr. Obama wouldn’t be commenting on any of the donors.
Mr. Chagoury’s ties to Mr. Clinton apparently began in the mid-1990s. The Clinton administration was being urged by human rights-activists and others to put severe sanctions on Nigeria because of the Abacha regime’s practice of jailing and executing political opponents.
In August 1996, President Clinton dispatched then-Rep. Bill Richardson to Nigeria to lay out the U.S. government’s concerns. In an interview earlier this year, Mr. Richardson, currently New Mexico’s governor and President-elect Obama’s nominee for commerce secretary, said that after a meeting with the dictator, he was taken to see Mr. Chagoury, who supposedly “had a lot of influence with Abacha.” During an hour-and-a-half discussion over pizza at Mr. Chagoury’s home, the businessman seemed sympathetic to U.S. complaints but noncommittal, Mr. Richardson said.
A few weeks later, prior to the 1996 U.S. presidential election, Mr. Chagoury contributed $460,000 to a tax-exempt voter-registration group connected to the Democratic National Committee. A 1997 Washington Post article said that Mr. Chagoury subsequently received an invitation to a White House dinner for Democratic Party supporters. He also met with Clinton administration officials on Nigeria and later talked privately about his efforts to influence U.S. policy toward that country, says a person familiar with the matter.
Over the years, business deals Mr. Chagoury has been involved with have been the subject of government investigations into suspected bribery by Western companies that do business in Nigeria, according to news reports. In 2004, Mr. Chagoury was among those whom Nigerian investigators sought to question about a gas-terminal deal, according to news reports. He hasn’t been accused of wrongdoing in any of the investigations.
Despite any controversies, Mr. Chagoury has steadily built ties to Mr. Clinton. In 2003, he helped organize a Caribbean trip where the former president was paid $100,000 for a speech. Mr. Clinton has made over $40 million giving speeches around the world. According to news reports, Mr. Chagoury attended Mr. Clinton’s 60th birthday bash two years ago in New York. He also joined the former president at the gala wedding celebration in France last year of Mr. Clinton’s top aide, Douglas Band, say people who were there.
During the just-completed election campaign, a Chagoury relative, Michel Chaghouri of Los Angeles, was listed in campaign records as someone who raised at least $100,000 for Mrs. Clinton’s presidential campaign. Campaign records also show that Mr. Chaghouri raised money from a number of individuals named “Chagoury” or “Chaghouri” or “Chamchoum” — Chamchoum is the maiden name of Gilbert Chagoury’s wife. Several gave the federally allowed maximum of $4,600 each. Mr. Chagoury’s name doesn’t appear as a donor. As an apparent foreign national, Mr. Chagoury would generally be barred from giving to a U.S. presidential campaign.
Mr. Chaghouri declined to discuss his relationship with Mr. Chagoury or his fund-raising efforts. “I honestly can’t talk with you,” he said.
*Write to John R. Emshwiller at john.emshwiller@wsj.com
Chasing the Ghosts of a Corrupt Regime
Gilbert Chagoury, Clinton donor and diplomat with a checkered past.
January 8, 2010
BY Robin Urevich/Business Of Bribess
http://www.pbs.org/frontlineworld/stories/bribe/2010/01/nigeria-chasing-the-ghosts-of-a-corrupt-regime.html 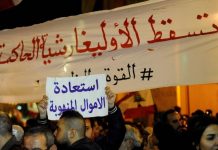 A Bundle Of English Reports, News and Editorials For February 20-21/2020 Addressing the On Going Mass Demonstrations & Sit In-ins In Iranian Occupied Lebanon... 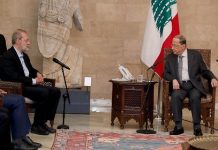 A Bundle Of English Reports, News and Editorials For February 17-18/2020 Addressing the On Going Mass Demonstrations & Sit In-ins In Iranian Occupied Lebanon... 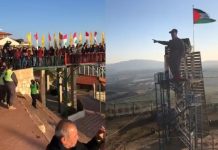 A Bundle Of English Reports, News and Editorials For February 16-17/2020 Addressing the On Going Mass Demonstrations & Sit In-ins In Iranian Occupied Lebanon... 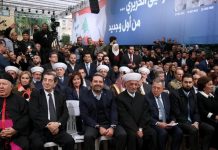 A Bundle Of English Reports, News and Editorials For February 14-15/2020 Addressing the On Going Mass Demonstrations & Sit In-ins In Iranian Occupied Lebanon... 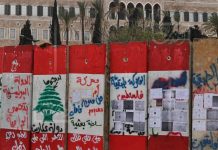 A Bundle Of English Reports, News and Editorials For February 11-12/2020 Addressing the On Going Mass Demonstrations & Sit In-ins In Iranian Occupied Lebanon...