Christians Under Siege in Iraq

By now, all Christians living in the second largest city of Iraq, Mosul, have been removed, their belongings stolen, their houses seized, their churches burned or transformed into Mosques by an army brandishing black flags with Koranic inscriptions on them. Christians fleeing north for their lives were told by the fighters identifying themselves as the army of the Islamic state that they had four choices: Convert to Islam, pay a Jizya tax and live under the protection of the Islamic state, leave the city, or die. This is happening in 2014, in the post-American-occupation of Iraq, after several legislative elections across the country, and at during the age of YouTube and Instagram.

Ironically, though, this barbaric wave of jihadists identifying themselves as the “Islamic state” claim they are at the core of a new caliphate, one that — according to the declarations of ISIS — will bring back the glory of the early conquering caliphs. Since 9/11 and even back in the 1990s, the international community has had endless opportunities to listen to or watchcommanders of the movement, under different names, uttering the same words,issuing the same ideological fatwas, and conducting the same violence against their enemies: the Muslim apostates and all infidels (including Christian, Jews, Hindus, Buddists, and atheists). What happened in Mosul and continues to happen at the edges of the Nineveh Plains of northern Iraq has already happened throughout the region and around the globe. It has been replicated inside Syria with the same Islamic state and its jihadi clones, al Nusra and the other al-Qaida hybrids. Across the border in northern Lebanon, Ansar al Islam has taken part in their own kill-the-infidel wave. In Libya, Ansar al Shariah has been pursuing Copts with the same violence applied by the Gamaa and the Muslim Brotherhood bands across Egypt. Boku Haram has been the master of genocide in slices of northern and central Nigeria.

The Taliban have been experts of the strategy for years, as has Abu Sayaf of the Philippines. The so-called ISIS is nothing but a successful form of previous Jihadists; they have added nothing to the murderous ideology of violent apartheid and mass murder against the rest of humanity. There are no differentiating factors found in their outrageous doctrine, their bloodshed, or their intentions. Instead, what sets them apart are their strategic successes — or, really, our failures — and the people they are decimating and the visibility of their actions. “Al Dawla al Islamya” has seized half of Iraq and Syria, merged them into one caliphate, crumbled the pro-Iranian Army of Iraq and bled the Assad regime forces. That in itself is the victory that Osama bin Laden was prophesying about. What is stunning public opinion around the world — particularly young users of social media — is the reality of jihadi intentions regarding the people of Nuwn. A few days ago, just hours after the soldiers of the new caliphate began entering Mosul, and the Iraqi soldiers began fleeing back to the Shia zones, I started receiving the first photos of houses of Christians marked by the Arabic letter “Nouwn.”

It stands for the first letter of “Nasara,” the name given by jihadists to Christians, depicting them as “followers of Jesus of Nazareth.” Days later, the people of Nouwn were driven out of the city in a scene reminiscent of centuries past. But this time, socialmedia, and soon thereafter the mainstream media, revealed to the world what the marking of a community looks like. The world has not seen such a Holocaust reminder since the Nazi marking of Jews with the Star of David in the 1930s, at least not so present a symbol that openly declares the political intentions of the perpetrators.

The Nouwn is now becoming a symbol of protest around the net as hundreds of thousands of users are identifying with this Arabic letter. “We are Nouwn too, we are Nasara” is going viral in cyberspace, overwhelming the apologist assertions that Christians are not targeted by the jihadists. That is a lie that has been laid bare in the open light of day. What the Islamicstate has demonstrated in Mosul is the deeply rooted intentions of all jihadists. The people of Nouwn are not just the beleaguered Assyrian, Chaldean, and Syriac ancient and precarious communities of Mesopotamia or of Syria; they are all peoples whowould fall under the rule of the jihadists anywhere on the planet. In that sense, the social media campaign is accurate in its slogan. All of us are Nouwn people if jihadists rule. 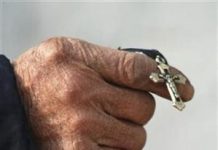 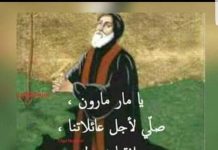 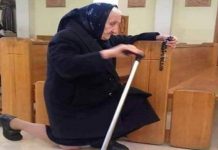