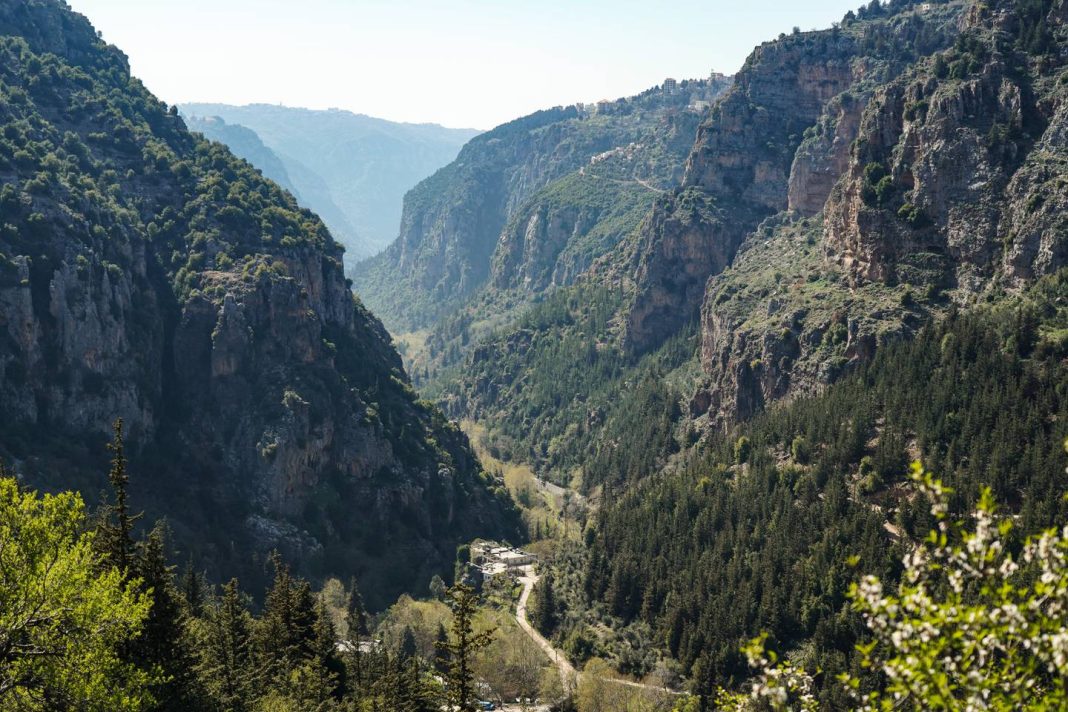 Nestled deep in Lebanon’s Qadisha Valley, for centuries the Deir Qannoubine monastery has been a refuge for Christian communities fleeing persecution. Accessed by a narrow, unpaved road carved into the Qadisha — or holy in Aramaic — Valley in north Lebanon, the monastery has sat on top of a steep cliff since the 4th century. It is one of a number of similar sites scattered across the tree-lined valley, described as one of the most important and earliest Christian monastic settlements in the world, with snow-topped peaks still visible in the background. And while a handful of nuns live there all year round, Father Hani Tawk, a Maronite priest, leads celebrations and ceremonies at Deir Qannoubine on important religious occasions — including Easter.

“It’s our roots here. Our Jerusalem, our Rome,” said the father of four. “It’s like a shelter, to keep safe our faith and our freedom against all the armies [and] occupation of our land. Arab, Mameluke, Ottoman,” he said from the valley, which for many perhaps now serves best as a refuge from frenetic city life and the litany of problems currently affecting Lebanon. Wadia Elshaya, a nun at the monastery, loves life in the valley. “It’s almost ascetic, especially in the winter, when there’s no one else here.”

Normally Father Hani is based in Beirut, where he operates a food kitchen for those in need in Karantina, a largely industrial area that was severely hit by the port explosion that struck the capital in 2020. But he regularly retreats to the monastery and Qadisha Valley. “It’s my history, it’s my roots. Also, it’s my future. Why? Here, it’s like a place to recharge — like a battery. I come here to recharge, to make a spiritual retreat … we need sometimes to come back, to pray, to feel and smell the spirit of God.”

According to Father Hani, 23 patriarchs of the Maronite church lived and died at the monastery over a 400-year period — 15 of them are buried in a tomb in the adjoining Saint Marina the Monk church. The seat of incumbent Cardinal of Bechara Boutros Rai is now in Bkerke, near the coastal town of Jounieh, but his red-roofed summer residence is visible from Deir Qannoubine on the other side of the valley in Dimane.

Father Hani arrived at the monastery on Wednesday, readying himself for a long weekend to celebrate Easter. Save for the occasional birdsong and the river that runs towards Lebanon’s second city of Tripoli, it is the ringing of the bells that breaks the silence as the sun dips below the hills that wall the valley on Thursday evening. Maundy Thursday is the day of the Last Supper, the final meal Jesus is believed to have had with his disciples, and is marked by the ritual of the Washing of the Feet, as a sign of humility.

About 40 or so worshippers line the 10 rows of benches in the small church for the ceremony. Father Hani, previously wearing a jumper, is now cloaked in white robes as he leads with his sermon, followed by prayers. Part way through the evening, he kneels down and moves across the aisle to wash the feet of 12 people — representing the 12 disciples. Although relatively small, the monastery has a deceptive amount of space. Small entrances reveal extra rooms for prayer, built into the hillside, while below are a number of bedrooms for those wanting to stay.

For centuries the monastery has been a refuge for Christian communities fleeing persecution. Photo: Finbar Anderson / The National

Stooping under faintly lit doorways and narrow paths through the monastery, Father Hani points to a number of what were once secret escape routes, if the monastery came under attack, leading into the mountains. They are no longer hidden. “Now we have a country, we are safe now. We don’t need again need this hide and escape. Thank God, after 1920 we have a big Lebanon and a state. We have many, many problems [in Lebanon] but we have a country, we have our citizens.” And while not everything is exactly the same as it was centuries ago — the occasional smartphone is whipped out to record the foot washing and a new mosquito net covers the centuries-old former main entrance door — there is an effort to draw from the “feeling” and history that has taken place at the monastery. “I feel God provides this type of life, firstly to help prayer. So that we can pray for our world, our nation, and for anyone in need. Because if there’s no prayer, there’s nothing,” said Wadia Eshaya, the nun who resides at the monastery. “I love this life of prayer, this type of life. Here, people have a lovely message, it’s very beneficial. Some people, when they come here, they feel such a peace, the peace of God that you don’t find anywhere else.”

Father Hani Tawk walks along a pathway built along the steep cliff on which the Deir Qannoubine monastery sits. Photo: Finbar Anderson / The National