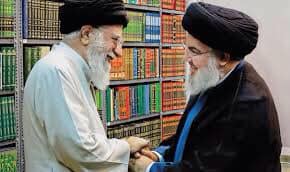 “When you stare into the abyss, the abyss stares back “Friedrich Nietzsche”

The US-Iranian negotiations seem to falter since the Iranian regime is multiplying its equivocations in regard to the international inspection of the nuclear sites, the thresholds of Uranium enrichment, the pursuit of its imperial inroads throughout the Middle East and State Terrorism within Iran and on the international scene, while Hezbollah is striving to consolidate its foreclosures in Lebanon and transform it into a platform for regional and international subversion. Meanwhile, the resignation of Georges Cordahi, the Hezbollah’s mouthpiece within the manufactured and manipulated cabinet coalition in Lebanon, is instrumentalized as a minor deflection from the scripted course and a decoy to alleviate the international pressure, simulate a faked normalization at the very time when the French President is trying to stymie polarization in Lebanon and the region and put a brake on Lebanon’s sliding into hell.

The chances of success of the late French presidential diplomacy are quite controversial since the normalization of the Iranian regime and its will to reengage the international community are still problematic, let alone nought. In the meantime Lebanon is pursuing its plunging into hell and witnessing the unraveling of its socio-economic and ecological textures, financial equilibriums, civil peace and ability to retrieve back a functional statehood and an effective sovereignty. The overriding question which hovers over political debates in our country is, whether Lebanon is likely to survive this destructive course driven by a deliberate policy, devised on the intersection between the Iranian regime’s imperial policy and the open determination of the Hezbollah to take it over and overhaul its geopolitical configuration and normative political choices.

There are no chances for Lebanon to address its devastating financial, socio-economic and environmental problems in a context of geopolitical volatility, systemic political instability, open domination strategy and hermetic oligarchic foreclosures.

The Lebanese left to their own devices are unable to restore the working conditions of a working statehood, jump start their economy, reset their financial pendulums, overcome the long periods of stasis, and resist the intentional demolition of their centennial social capital. Lebanon has no chances to survive short of an interim internationalization regime to restore its self determination, engage a reformist course and rebuild institutions away from a bitter legacy of endemic civil instability, limited, discretionary and subjugated sovereignty, dysfunctional governance, and oligarchic entrenchments. The deliberate obstructionism of Hezbollah and its resolve to destroy the hereditament of a liberal and Democratic Lebanon is no hazard, after a centennial of attempts to subjugate Lebanon’s sovereignty and do away with its civility and national concord. Short of this international interlude, Lebanon is going to witness a long descent into the abyss, and the destruction of its historical legacy and exceptional democratic credentials in an ocean of Sultanism, destructive authoritarianism and totalitarian islamism.